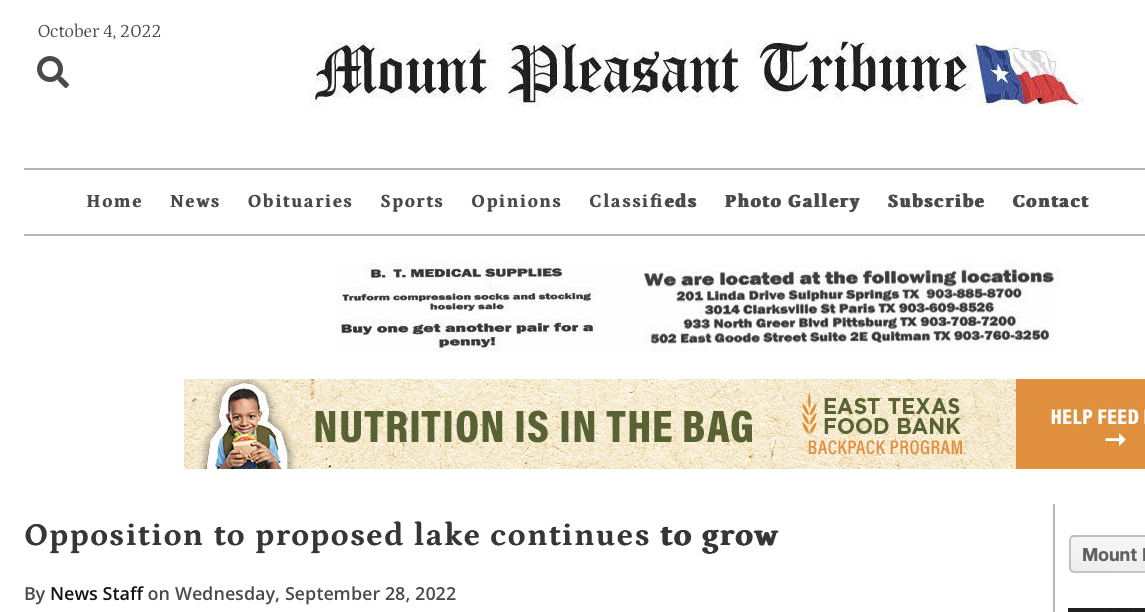 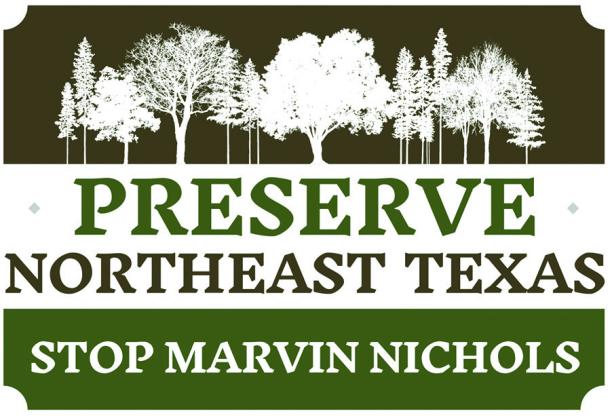 From the first opposition meeting more than 20 years ago in a tiny church in Boxelder, to now a statewide, organized effort, the opposition to the massive, proposed lake in the Sulphur River Basin continues to grow.

The proposed Marvin Nichols Reservoir has long been deemed by the people of Northeast Texas as something that would have a devastating impact to local tax bases and the local economy, but an even greater impact to the long list of landowners in the Basin that would lose generational homesteads, and a way of life passed down to them by their grandfathers. Inside the boundaries of the proposed lake are farms and ranches that have belonged to the same families for generations, and historical sites like Native American burial grounds that would be lost forever with the lake’s construction. Aside from a long list of endangered species that would be wiped out by the lake’s construction, there would also be communities put underwater for good.

Now, thanks largely to the efforts of Preserve Northeast Texas, more than 2,000 Texans have expressed their opposition to the proposed reservoir by signing a petition which condemns the water project and states, “The proposed Marvin Nichols Reservoir would rob Northeast Texas of land, valuable jobs, and precious water, devastating the region’s economic vitality, heritage farmlands, and natural resources. I stand in opposition to this project and call on policymakers to put a stop to this costly, unnecessary and damaging project.”

The petition was created by the grassroots organization, Preserve Northeast Texas, a growing group of landowners, business owners, community leaders, conservationists, and elected officials who have banded together to voice their opposition to one of the biggest transfers of private land to public in modern history. The full list of petitioners pushing back against Marvin Nichols Reservoir can be found at www.PreserveNortheastTexas. org.

“Texas is growing, and water is a vital resource necessary for life and commerce,” said Bill Ward, President of Ward Timber Company. “That’s why the DFW Metroplex must do more to conserve and reuse this precious resource, rather than use eminent domain to take away the homes and heritage lands of fellow Texans. Reservoirs like the proposed Marvin Nichols project are an outdated solution to meet our water needs.” The Marvin Nichols Reservoir is the costliest project in the Texas State Water Plan, estimated at $4.4 billion and growing. The reservoir would flood 66,000 of acres of hardwood forest, farms and ranches, and irreplaceable wetlands. An estimated 130,000 additional acres would also be removed from private land ownership for environmental mitigation. This means an estimated 200,000 acres of Texas land would be taken out of production. The Marvin Nichols Reservoir has been controversial for decades, yet the target date for construction completion on this project was moved forward in the State Water Plan last summer from 2070 to 2050.

Despite its inclusion in the state water plan, the reservoir is seen here in Northeast Texas as little more than a means for the Dallas area suburbs to water the lawns and fill their pools, and not a needed water source for the people here that would be impacted by its construction. The majority of the water provided by the reservoir, if built, would be piped directly to Dallas area cities like McKinney, Allen, Plano and others in the quickly burgeoning metroplex.

Although the reservoir is now a part of the state water plan, the time to continue the opposition against it is still now, and the voices of opposition can still be heard. That opposition includes many of the same who have fought the lake’s construction since day one at that little church. Names like Max and Shirley Shumake, Gary Cheatwood, Richard LeTourneau, Janice Bezanson and Ward Timber’s Bill Ward are now members of the Preserve Northeast Texas Steering Committee. Others include Cass County Judge Travis Ransom, Jim Thompson, Linda Price and Cynthia Gwinn.

To sign the petition or learn more about the proposed reservoir and how to stop it, visit: www.PreserveNortheastTexas. org. The group can also be found on Facebook and Instagram at @PreserveNortheast-Texas and Twitter @NoMarvinNichols.

Texas’ plan to provide water for ...